Last year, India and Southeast Asian countries were affected by the epidemic, and a large number of textile orders flowed into China. Now, as the epidemic control gradually shows results in these regions and countries, the textile industry has also begun to recover.

According to statistics from the Ministry of Industry and Commerce, Vietnam’s exports of finished textile products in the first quarter of 2021 reached 7.18 billion U.S. dollars, an increase of 1.1% over the same period in 2020. Fiber and textile yarn exports grew by 31%. Canvas and industrial fabric exports grew 8.8%. In the first quarter of 2021, the Vietnamese securities company VNDIRECT predicted that with the economic recovery of the main export markets of Vietnam’s textile industry such as the United States, the European Union, Japan, and South Korea, the value of Vietnamese textile exports will also increase. According to VNDIRECT, Vietnam’s textile exports in the second quarter of 2021 will grow by 8.4% compared to the same period in 2020.

In January, Vietnam’s share increased slightly in the European textile and apparel market. According to the latest statistics, in January this year, Vietnam’s exports of textiles and clothing to the EU were US$272 million, an increase of US$2 million from the previous month and US$10 million year-on-year. In 2021, the goal of Vietnam’s textile and apparel industry is to reach 39 billion U.S. dollars in exports, an increase of 10% over 2020. Wu Dejiang believes that this goal is feasible because Vietnam’s textile and garment industry is facing huge opportunities brought by many new free trade agreements. 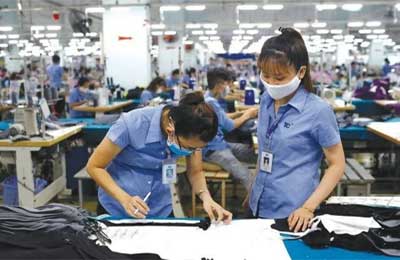 Pakistan and Bangladesh Orders Pick Up

According to news from the Economic and Commercial Section of the Chinese Embassy in Pakistan, data released by the Pakistan Statistics Bureau on February 18 show that in the first seven months of this fiscal year (July 2020 to January 2021), Pakistan’s textile and apparel exports have increased by more than 8%, to 8.76 billion US dollars. Among them, exports in January 2021 increased by 10.79% year-on-year to US$1.32 billion. It is reported that the growth of textiles and clothing mainly comes from high value-added textiles, such as knitwear, towels, and bedding. About the Author: Hubei Decon